Staying Out Instead of Breaking In 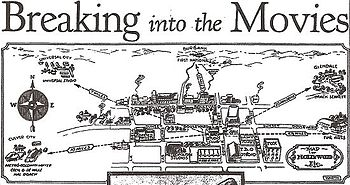 It’s not a secret. Everybody wants to break into Hollywood. Your retired uncle on your mom’s side took an acting class at a community college. Your father-in-law got a GoPro for Christmas and thinks he’s the next Spielberg. Hell, even your sixteen-year old dogwalker has a spec screenplay that’s “kind of a romantic sci-fi comedy scavenger hunt written for Ryan Gosling as the lead.”

Fame, fortune, following your passion, feeding your ego… There are plenty of motivators, but have you really sat down and thought about why exactly you want to be a part of Hollywood? Maybe the answer isn’t quite clear. Maybe it’s a gut feeling that you have but can’t explain. With filmmaking technology becoming exponentially better and cheaper, screenwriting contests and fellowships becoming more prevalent, and social media turning nobodys into kind-of-somebodys, aspiring filmmakers are constantly being told that there are more ways to break in than ever. But, is “breaking in” even worth it? If filmmakers have everything they need to create content (especially content in which they have creative control over), then what exactly do they need Hollywood for?

Mitch Hurwitz created arguably the greatest sitcom of all time, Arrested Development. As such, many wannabe sitcom writers envy this comedic genius and would no doubt love to be him in certain capacities. However, as he explained at the Banff World Media Festival last week (and could be ascertained from previous interviews) it wasn’t all fun and games creating/running a show for Fox. And “running” was a loose term, since they tried so very hard to handicap him.

This isn’t significantly new information, nor is Mitch’s case all that unique. Some show runners have even been fired from the very show that they created (ahem…Dan Harmon…ahem). The difficulties aren’t specific to high-level show creators either, as the path to get there is rarely easy. There are tons of screenwriting horror stories which relate breaking in to having gone through war. Actors and actresses don’t have it any easier, as many are reduced to reality show roles to pay the bills until they land that Oscar-worthy part in a Martin Scorsese feature.

And once you’ve “broken in” it’s not like you automatically get a Bentley, estate in Beverly Hills, and a loyal-customer punch card for the best attorney in LA. You have to stay in. Professional screenwriters, John August and Craig Mazin, have talked frequently on their Scriptnotes podcast about how “staying in” is sometimes harder than breaking in. So, you struggle to get in and once you’re in, you struggle to stay in. Sure, you might be rich, but money doesn’t buy happiness, especially not if you’re constantly stressed out about getting kicked out of Hollywood and losing everything. Consider, instead of breaking in, using the available tools to create the content you want and staying out of Hollywood. The scope may be on a much smaller scale, but you’re level of happiness may actually be improved due to a lower level of stress and higher level of control over your content.

This independent attitude isn’t new, but with so many more young filmmakers entering the industry, I feel like there’s more promotion of the gold rush mentality, rather than the idea that you can carve out your own small segment of the industry and happily operate without constantly trying to get noticed by Hollywood.

Yes, I realize that the lack of monetary rewards probably impede the desires of many filmmakers to stay outside of the Hollywood bubble. But if more and more filmmakers actively stay out of Hollywood, eventually someone’s going to figure out how to make a decent living from it.

Instead of constantly trying to break in, maybe the new goal should be to stay out, stand out, and and enjoy the view of Hollywood from the outside. Of course all that goes out the window if you’re offered a check for $1 million. You’ve got bills, so cash the check. Seriously, renting a Bentley for an hour is so much more fun than struggling from the outside…]]>