25 Animated Films You MUST See: #20 The Triplets of Belleville

When I was looking for a film for this week, I wanted something…new.

Not in the Japanese anime style, is what I’m saying.

Yes, I realized that when it comes to my animated films, I show Studio Ghibli a lot of love. But I’m working on it. Really.

But difference in animation style isn’t the only reason I wanted to add “The Triplets of Belleville” to the list — this film is just different in general. There really isn’t a way to describe the way I feel about it. You’ll find yourself grinning once the film’s over, because it has this strange ability to be insanely dark and insanely satisfying, all at once. There isn’t just one descriptor that does it for me — weird, goofy, grotesque, odd, magical — it is all these things and more.

This 2003 comedy written and directed by Sylvain Chomet tells the story of Madame Souza, an elderly woman who lives in a slumping house in the parisian countryside with her grandson. When she finds that he is in love with cycling she buys him a bicycle and trains him until he is one of the top cyclists in the world and finally ready to compete in the Tour de France.

But during the race, her grandson is kidnapped by the French mafia and taken away. She goes on a quest to rescue him and finds that he has been taken to Belleville. This city he has been taken to could be New York (with some strong comedic American images such as overweight citizens and some unsavory attitudes.) Souza is accompanied by Champion’s obese hound, Bruno, and joined by the Triplets of Belleville, music hall singers from the 1930s, whom she meets in the city.

Now the thing I love most about this film is that there’s hardly any dialogue — just a snippet of French here and there and some sound effects, and absolutely all of the humor comes through. There are several repeated joke, especially with Bruno, that hit hard each time; it’s almost astounding how much I caught myself laughing at a joke that just revolved around Bruno barking at a train.

Also, all of the characters are really well-defined. There’s also a very strong tie to making the characters resemble animals (horse sounds appear behind the cyclists, a mouse sound for the mafia’s stooge mechanic) which makes the experience even more beyond the norm.

And though the animation isn’t the specific reason I picked this film — man, if it isn’t just tops.

It’s definitely one-of-a-kind animation. Sharp, crisp, but still creating images or expressions that resemble caricatures at times. There are some seriously dark scenes, and maybe a reason for PETA to stand up for frogs, but I still can’t get over the campy witty atmosphere. Also, the film’s only a little longer than an hour, and streaming on Netflix. Really, what do you have to lose?

The film itself received some great review and several awards, but not gaining the same stream in the U.S. as it did overseas. But perhaps the saddest thing about this film? It lost the 2003 Best Animated Feature award to Finding Nemo. 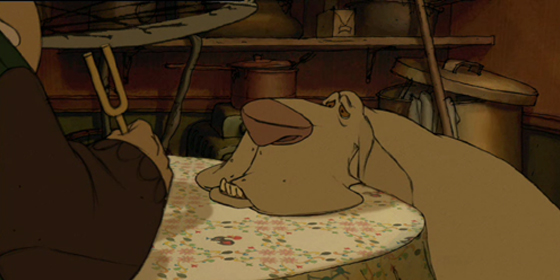