You May Have Missed: Defendor

You may have missed the movie Defendor. If that is the case, here is the trailer.  The short version is that Arthur (Woody Harrelson) is a simple, honest man who adopts the person of Defendor (a DIY Batman) to rid the streets of crime, especially his nemesis, Captain Industry. 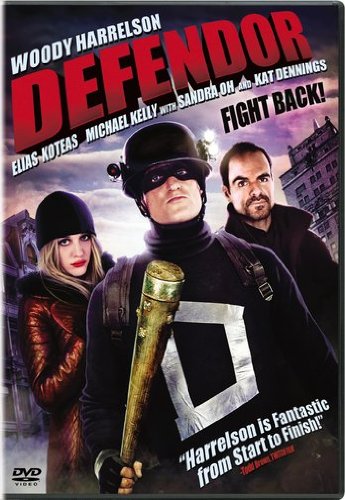 The difference between Defendor and other “super” hero movies is Arthur’s character.  All heroes want to help, but most are also seeking a little bit of glory.  Arthur never asks for recognition, he is simply trying to right the wrongs he sees in the world. Throughout the film various characters try and understand his angle: his hooker friend, the crooked cop, his court appointed psychologist.  Most have trouble accepting that he wants nothing more than to do what’s right.

Defendor plays like It’s A Wonderful Life in reverse.  Instead of seeing the effect of one man’s absence, you see the impact of one man’s presence. There is a device throughout the film of voice over for a radio host and his callers to show public opinion about the state of things in the city as well as Arthur’s influence as he goes on his crusade.  Initially you hear the public’s frustration with the status quo, but also their complacency to just call in to a talk show and complain, either because it gives them a sense of doing something productive, or because they think there is nothing else they can do.

The wonderful thing about Arthur is that he isn’t the best at what he does; he doesn’t have expensive gadgets, he doesn’t have years of fighting experience, he isn’t brilliant, but he is willing to do something.  The inspiration he brings is still relevant in a world of slacktivism and Facebook rants in lieu of going out and trying to change the world for the better.  If Arthur Poppington were anywhere near as articulate as Bruce Wayne, then the following quote from Batman Begins would have been just as appropriate, if not better, coming from him: “As a man, I’m flesh and blood, I can be ignored, I can be destroyed; but as a symbol… as a symbol I can be incorruptible, I can be everlasting.”  And he can inspire others, fictional or not, to fight back.