Richard Linklater directs an all-star cast in the film “A Scanner Darkly”, the tale of an undercover cop in a futuristic, dystopian world, fighting on the front lines of the drug war, becoming a victim himself.

In the world the movie creates, we are only a few years down the road, in an America plagued by a dangerous new drug – Substance D. With the number of users growing and growing, the government instills a high-tech, rather invasive, security network, tracking phone calls, interpersonal interactions, and even recording you inside your home. Beyond this, they have developed a sophisticated informant network with undercover police officers, Keanu Reeves being one of them. It’s this element the action of the film revolves around – Reeves walking the line between cop and addict, the later taking over his world.

It’s only when Reeves h 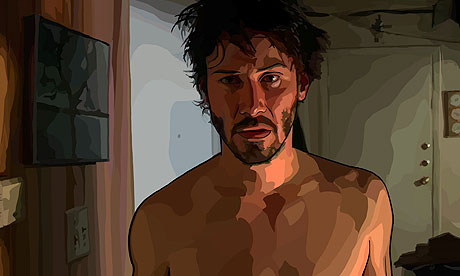 its his lowest point that the plot twists with devastating effect. The police intended Reeves to become an addict and develop brain damage as a means to get him into rehab. Once there, the audience discovers New Path, the rehab facility, is actually the entity developing Substance D, and Reeves’s druggie girlfriend (Winona Ryder), is actually the cop that has set this entire sting operation up, hoping that Reeves will be cognizant enough to break the story from the inside.

Apart from being an anti-drug film, this is a story warning of police powers, namely, handing over privacy for security. Though this is only a sub-plot of the film, and is implied more than anything else, a few sequences make its point heard clearly. For example, as the film starts and we’re being introduced to the different characters, Reeves walks down the street talking to his girlfriend on the phone. From multiple cameras and wire-tapping technology, the police track the call from a computer cubicled center, identifying people based on voice signatures. It appears from this moment on that no one is safe from their ever-watching eye. Later on, a cameo appearance from Alex Jones, credited as Street Preacher, rants about the dangers this new world places on individual liberty. No sooner does he demonize the government and their tyranny—then a black van with riot cops arrives, tazing and dragging him away.

One other idea the film presents is personal autonomy. Near the end of the film, after Winona Ryder reveals her intention all along, she feels as though she’s left the moral gray area and stepped into the wrong. She confesses that Keanu Reeves had no idea what was happening, and they ruined his life without his permission. This is another interesting liberty point overtly discussed – the idea that a person should be the captain of their own destiny and have the right to choose their fate.

1) Why did the police taze and arrest the man shouting on the sidewalk (the Street Preacher)?

2) Do the benefits of the police surveillance pay off in the film?

3) Do the benefits of the police surveillance outweigh the costs to individual privacy?