In the film “Contact” an astronomer (Ellie), considered fringe by many of her colleagues, discovers a radio signal transmitted deep in space, in essence, discovering alien life.

As the film opens, is clear to see that Ellie is pursuing her life’s dream: contacting intelligent life in space. However, soon after arriving to a large antenna in Central America, her project is shut down by the National Science Foundation (a federally funded program) who sees her work as frivolous. Steadfast, she lobbies for private funding and finds it with an eccentric billionaire who believes in her passion. It’s after this that she makes a breakthrough. On the verge of the government once again “icing them out”, she discovers a mysterious transmission flying through space, hurdling toward Earth.
Despite this validation, the government still comes flying in, but for a different reason. The U.S., through eminent domain, overtakes her project and places its own people and bureaucratic processes in power. While credited with the finding, government officials act as the heroes, standing squarely in the spotlight. Power over the project is continually stripped from Ellie, culminating in the decision that she will not be the person traveling through space in the newly constructed machine (largely due to her lack of religious conviction). In the end, after the government’s project ends tragically, a second facility, created through a private contractor, works flawlessly, and sends her to space. 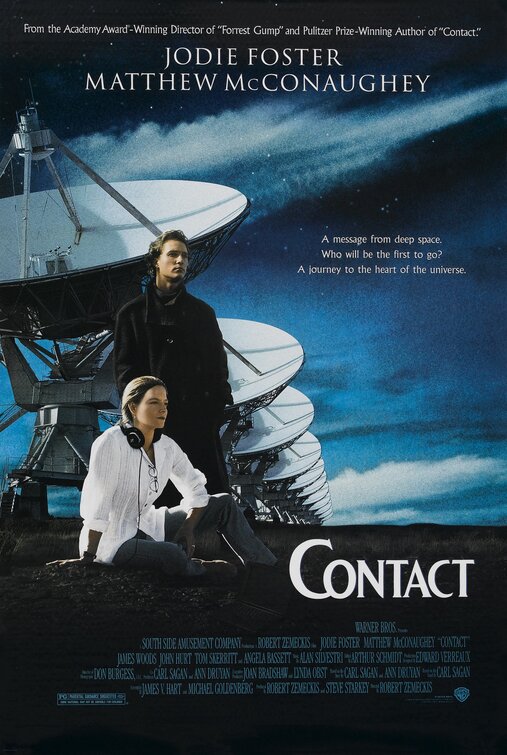 This film touches upon two major liberty-oriented themes: first, that government action in industry is ineffective, and second, it levies a question about tolerance in regards to religion. In many situations, the government tells people what is valid research and what isn’t; what is a valid career and what isn’t. Even more often, the audience sees the disastrous effects of the government getting involved with these projects. Between government officials complaining about bureaucratic steps to insure security despite time-driven necessity, and a security breakdown that costs dozens of people their lives, the government does little to help the science of the situation; rather, they seem a hindrance to the process. Time and time again it’s private people, donors, and citizens that propel the project forward.
The film also has some serious religious overtones. Faith and spirituality are discussed regularly and become a major point of contention. As Ellie stands ready to man the machine to travel to the deep reaches of space, she is disqualified for her lack of religiosity—passed over for a man who plays “the God card” as a means to an end. The point the film is trying to make here, at least in my interpretation, is that, while Ellie is sidelined due to her beliefs, it is important to be tolerant of intolerance and respect the views and opinions of all.
1) Is the government’s use of eminent domain proper here as they take control over Ellie’s project?
2) Should the government be involved with things like ‘the sciences’?
]]>